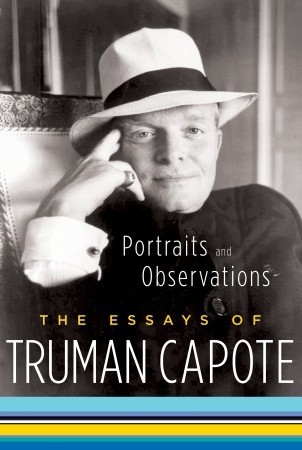 Perhaps no twentieth-century writer was so observant and graceful a chronicler of his times as Truman Capote. Portraits and Observations is the first volume devoted solely to all the essays ever published by this most beloved of writers. Included are such masterpieces of narrative nonfiction as “The Muses Are Heard” and the short nonfiction novel “Handcarved Coffins,” as well as many long-out-of-print essays, including portraits of Mae West, Humphrey Bogart, and Marilyn Monroe.

From his travel sketches of Brooklyn, New Orleans, and Hollywood, written when he was twenty-two, to the author’s last written words, composed the day before his death in 1984, the recently discovered “Remembering Willa Cather,” Portraits and Observations puts on display the full spectrum of Truman Capote’s brilliance. Certainly Capote was, as Somerset Maugham famously called him, “a stylist of the first quality.” But as the pieces gathered here remind us, he was also an artist of remarkable substance.

Praise for Portraits and Observations

"A wonderful volume...Nearly every page can be read with real pleasure...No matter what his subject, [Capote’s] canny, careful art gives it warm and breathing life."  –The Washington Post Book World

"Every piece is a treasure...Pages and pages of remarkably evocative, careful and well-observed prose [delineate,] in a measured and elegant manner, one of the most remarkable American literary lives of the twentieth century." –Jane Smiley, Los Angeles Times Book Review